A bit of a transit day today.  We packed up and said goodbye to Sol y Luna to head to Cusco.  Our first stop was Pisac and a souvenir market.  According to Ernesto, this was the first such market to develop in the Sacred Valley.  Now there are smaller markets at other locations (we saw one in Ollantaytambo and a few stalls in the town at the foot of Machu Picchu).  The guides hosted a fun game for us – they gave each of us 10 soles (roughly 2-3 dollars) to spend at the market.  The goal was to get a gift for a white elephant game at our farewell dinner the next night.  Neither Derek nor I are very good at bargaining and negotiating, and Derek is also not that good at making decisions like this – so, I have to admit, this task did create some stress…

But I thought it was a really great idea – because it gave us all a really low risk way to engage at the market regardless of whether we would shop on our own and also to try our hand at our negotiation skills.  The stalls had a fairly standard set of items – knit goods from alpaca or other wool (e.g., sweaters, gloves, socks, etc.); t-shirts; knick-knacks (small animal or other symbolic figurine, etc.); bags, and some pretty funky colored shoes.  I did buy a sweater – although not the one shown.  The shoes were a big hit with the teens – almost all of them got a pair.  (All three of these pics are from the CD that we just received from AbD – the guides took pictures all throughout the trip and AbD sends you the complete set a few weeks after you return – that’s a nice perk!). 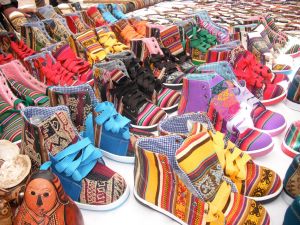 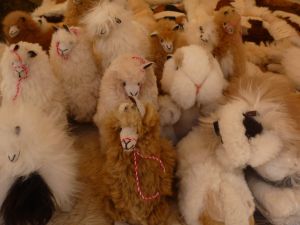 For some – the time at the market was way too short, for others – I imagine it was more than enough.  For us – it worked out fine – we didn’t get much, but we got things we were looking for.

Hopped back on the mini-buses for a ride to Awana Kancha where we saw, fed, and petted alpaca and llama.  Both alpaca and llama are camelids and were domesticated by early Peruvians.  Llama were used as pack animals and weren’t eaten or used for their fur.  Alpaca were more like sheep – used for both their fur and meat.  Early Peruvians didn’t have cows or oxen – the Spaniards brought them over.  The non-domesticated counterparts of the alpaca and llama include the Guanaco and Vicuna – and they had some wild Guanaco and Vicuna (shown) roaming the hills around Awana Kancha.

It was a blast – there were various species of the alpaca and llama (including the afghan dog looking kind).  We learned how to tell alpaca from llama (alpaca faces look like sheep faces and llama look like camel faces).  And we got to witness two alpaca really fighting eachother (could have been play – but it looked pretty vicious – each of them ended up with mouthfuls of alpaca fur). 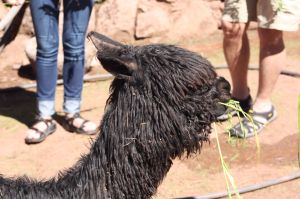 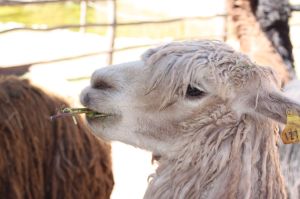 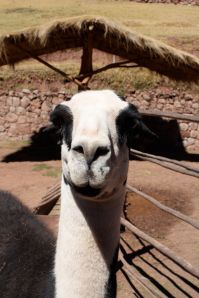 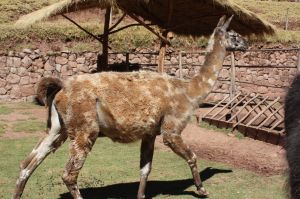 Then there were a few weaving displays which we passed by quickly as we had already seen this earlier.  And Ernesto showed us a display of some of the potato varieties in Peru.  Apparently there are 3000+ varieties of potato in Peru, not all of which are edible.  But I think more than 1000 are edible.  Being a rice girl, I wasn’t really able to appreciate the nuances of the potato varietals…

Like any good Disney site – the last stop was the gift shop!  There was a standard gift shop with a variety of items and then a high-end sweater or knit store.  The sweater store did some brisk business with our group!  We settled for Derek getting a nice pair of socks 🙂

Then we drove into Cusco and had lunch at the Sara Cafe Bistrot.  Ernesto gave us a short city tour – mostly of the central square.  Here’s a picture of the statue to Pachacuti – it’s good to be king (or emperor as the case may be) 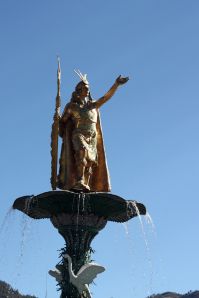 And then we checked-in at our home for the next two nights – Hotel Libertador.  A modern, western-style hotel with a foundation of Incan walls (visible from the bar area). 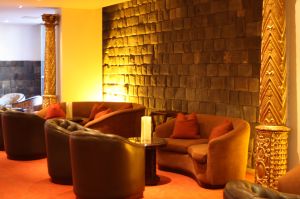 Oh – and remember that guy frantically taking pictures of us at the Cusco airport the day we arrived?  He randomly showed up outside our hotel with glossy photoboards with an individual’s photo in the center and tourist stock photos of Cusco surrounding it.  He tracked people down and showed them the photo of themselves.  Crazy!  Ernesto was very clear that he was not associated with Disney – this must be pretty standard for this guy – take pictures at the airport, hang out at the nice hotels to find the groups when they return.  There were always souvenir vendors outside of our hotel who would follow us to our bus or as we walked down the street.  Especially Valentine – he had watercolors – “My name is Valentine – maybe later?”

The rest of the day was on our own.  We joined up with Monique, Deb, Karen, and Diane and covered some serious ground.  We visited the Sun Temple (just across the street from our hotel) – check out the great Incan walls and the cool line-up of windows:

We dashed over to the Chocomuseo to sign up for a chocolate making workshop for the next day (Really, how could I miss this?  Was it ever a question that we would do this?).  And then did a quick tour of the Incan museum, where Monique proceeded to try and get poor innocent Derek to break the centuries-old Incan artifacts by jumping up and down on the notably weak, bouncy floors…  I had to step in and stop him before the security guard caught him…

Dinner at Incanto and drinks at the hotel bar.  Derek and I both ordered different Pisco drinks – mine is the one on the left – Pisco, chicha morado, ice.  Delicious 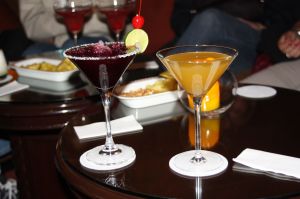