Ok – at the beginning of the spring/summer running season, Derek and I decided that we would sign up for the Shoreline Road Race Series.  Essentially – you run 7 of 8 races or 6 of 8 (if you include a particular race – the Sea Leg Shuffle) and you get a free jacket.  Sounds like a great deal, right?  We were already planning on doing several of them anyway.

Well – since it turns out that the September and November races didn’t fit into our schedules well – we decided we’d do back-to-back races on the first weekend of August. The Killingworth Road Race (4 miles) on August 4th and the Guilford Sea Leg Shuffle (10 miles) on August 5th.  Yes – it sounded like a good idea at the time, heck – it’s just 14 miles total, no problem!

So this weekend was the weekend and the weather gods decided to laugh at us!  The weekend was lining up to be 80 degrees with 90% humidity at race time for both days… OK – maybe some of you southerners think that that is normal – but, man, not for us.  I had to reconsider race goals.  Originally I had been targeting to “race” the 4-miler and just use the 10-miler (which I knew to be hilly) as a training run.  But with the weather – I had to reconsider what the word “race” meant.

Killingworth was billed as being “mostly flat” – but we could tell from the race elevation map that there was some type of hill at the end.  We arrived early to pick up our bibs and t-shirts.  We got race bibs #1 and #2 – crazy!  I guess we signed up super-early (I think in May) and must have been first!  It was kind of fun, and made me feel “elite” if only for a moment – I definitely knew I would not be living up to that number! 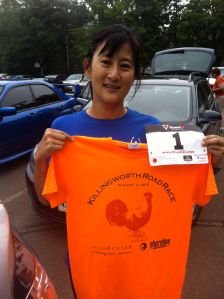 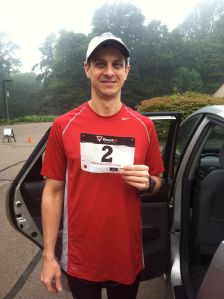 I was anxious about the race – short races always do me in and with the added weather complication, I was really uncertain as to what pace to start at.  The race was very small and very casual – the “start” was at the end of the church driveway, they had a talented local high-schooler sing the national anthem, and then they rang the churchbells.  The churchbells were our starting gun!

It was a fast field as always – and people took off.  I tried to control myself – but my first glance at my watch told me that I needed to pull back more.  In the first mile – we flew down two pretty steep hills.  And since the race started and ended at the same point – I began to realize that there were going to be some serious hills later on…ugh!  Big hills on the way down in the first mile – relatively flat in the middle, a few rollers – and a big hill over the last 0.6 miles or so to finish out.  My splits were way positive – but with the downhill and then uphill and the heat/humidity – I think they were ok.  I passed people going up and down hill – so I felt good about that.