If you’ve read much of my blog, you know that I love food.  And I like taking pictures of my food – especially when beautifully plated.  And the food aboard the Disney Dream – yes, the food in the standard dining rooms – is pretty darn good.  So – here it is – a quick rundown of our dining for the cruise.

Night 1 was in the Enchanted Garden.  I somehow got the idea that we should select from every course – so I was very full by the end of the evening.  I started with the Lobster Ravioli – honestly a little disappointing, cold and only ok.  Derek had the Ahi Tuna and Avocado tower – I believe he enjoyed it quite a bit. 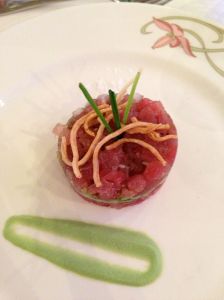 I think we each had a salad or soup – but honestly I can’t remember what it was.  For entrees, I had the Pan-seared Sea Bass – with Saffron and fennel risotto with a sweet chili glaze and Derek chose the Caramelized Sea Scallops – with roasted asparagus, sun-dried tomatoes, and pearl pasta, garnished with caramelized leeks and veal jus reduction.  Both were quite delicious.

For dessert, we both chose the Bananas Foster sundae.  Yum!

Night two we were in the Royal Palace – I liked the folded napkin detail they had:

I got lazier with the pictures, and we didn’t order every course.  My entree choice was the Oven-Baked Salmon Royale – Crowned with King Smoked Salmon and horseradish crust accompanied by sauteed swiss chard, truffle-infused cauliflower puree and white wine beurre blanc and Derek chose the Royal Palace Aged Angus Grilled Beef Tenderloin and Lobster Medallions – sauteed snow peas and marquis potatoes with a cognac reduction.  Again – both were pretty tasty 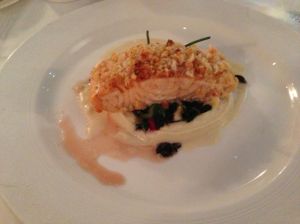 Desserts – I had the Strawberry Shortcake Sundae and Derek tried the dessert trio:  peanut butter mousse, mango cheesecake and Tahitian vanilla creme brulee.  If I recall correctly, this set off a creme brulee frenzy at our table.  One of our dining companions had never had it before and fell in love with it.  She ordered a couple that night and a couple on the last night. 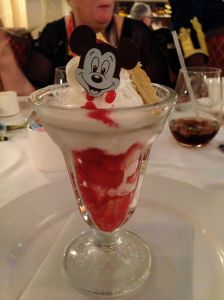 We got to talking about the celebrations that were going on throughout the dining room and Frank, our server, offered to celebrate something for us.  Because no one else had anything to offer, I said that Derek’s birthday was in a month (he was in the restroom at the time).  So they came by at the end of the meal and surprised him with a special song and cake.  Given that it wasn’t actually his birthday yet – he was really surprised!

Frank was phenomenal and we really enjoyed his service.

We skipped pirate night in favor of Remy (which I’ll write about later).  But our last night was at Animator’s Palate.  They had very cute decorations and touches in this restaurant: 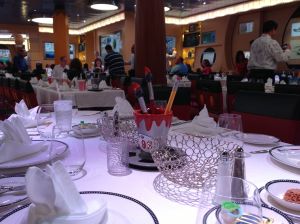 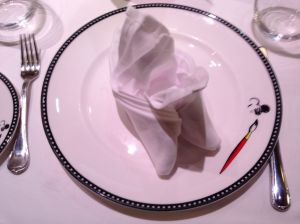 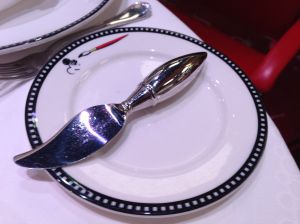 For an appetizer, I chose the Sesame-flavored Rock Shrimp and Caramelized Onion Cheesecake – with Asian barbecue sauce and topped with micro greens.  Our server kept making sure that I understood that it was a real cheesecake.  I have to admit – I was still surprised when it came out – I guess I was expecting rock shrimp separate from a caramelized onion cheesecake.

Main courses:  I ordered Grilled Pacific Black Cod with sauteed morel mushrooms on a yellow split pea puree and Derek ordered Animator’s Trio of Veal – Grilled tenderloin, pulled shank and tortellacci pasta with a sun-dried tomato and sage reduction and garnished with a potato crisp.  They were both delicious.  Yes – it’s true, I ordered fish every night – I guess I must like seafood! 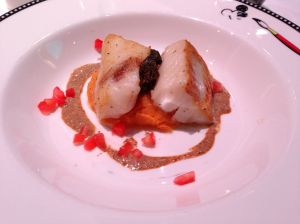 For dessert – I had the cookies and cream sundae!  Hard to believe, but I ended up ordering the sundae every night.  I do love ice cream, but I think it’s because, in the end, the other options didn’t wow me.

And a cool light up drink that I got at the Skyline bar.  This and the Meridien (the bar in between Remy and Palo) were our favorite bars – for their comfort and drinks. 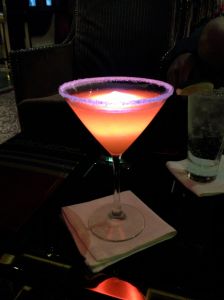 1 thought on “EEC and Dream Cruise – the food!”