Friday dawned and after an easy run – the four of us headed to the expo.  We figured we’d get there at the opening (as Derek and I needed our park tickets) – no big deal.  Whoa – we were there well in advance of the 10am opening and the line was enormous.  So enormous, that the first place we went to stand in line was actually the middle of the line and we got shooed to the end.  After standing around for 15 or so minutes, we discovered that we were in the expo line and that there was a separate packet pickup line.  My preference was to be in the packet pickup line – as there wasn’t anything I wanted at the expo that I thought would sell out – but, we were already in line, Beth was hoping to check out the Dooneys (which can sell out), so we stayed.  That was big mistake.

Once the expo opened – the line moved quickly and we actually got into the runDisney store right away.  But then it was a madhouse – like total feeding frenzy.  We all tried to stay really calm and stay as much out of the fray as possible.  When I asked one woman where the Dumbo merchandise was – she said (in a highly panicked voice) “they’re all out, it’s all gone.”  Which I felt was patently ridiculous – we were the first ones in the store, the store had only been open like maybe 5 minutes – it was completely unfathomable that Disney would have only provided enough to last 5 minutes.  And, I was rewarded – they were bringing out new racks of the merchandise and I was able to get the shirt I wanted (and try on two different sizes).  We all picked out the items we wanted and then went to go stand in line.

This is where things turned from bad to worse.  The line was so long that Beth and I decided to go pick up our fairy wings and skirts at another booth while the guys waited in line to pay.  We did that, and returned, and waited some more.  Then we came up with the idea that two of us should go and get our packets and then come back and the other two would go.  So Beth and Noel went to get their packets.  Unfortunately, once they left the expo area, they found out that they wouldn’t be let back in (without standing in some crazy line again).  Derek and I waited, and waited, and waited – finally getting up to pay.  Beth and Noel had a long line for packet pickup – which luckily moved a bit faster once Derek and I got there.  By the end of this whole fiasco, I was beat and barely holding it together.  All in all – it took us 4 hours to get out of there.  Unbelievable!  It was like runDisney had never organized a race before.

Thankfully – we had a lovely, relaxing lunch at La Brea Bakery which restocked our energy and good mood.

After lunch – we headed right to our tour – we had booked the Walk in Walt’s Disneyland Footsteps tour.

But first – a little interlude and dance by everyone’s favorite chipmunks:

Our tour guide was awesome and the tour was very interesting – we heard about Walt’s influence on attractions and the design of Disneyland.  We were also able to ride Peter Pan (without waiting!), ducked into the Tiki Room, check out club 33 (ok, we only got to be downstairs and see the elevator), and… 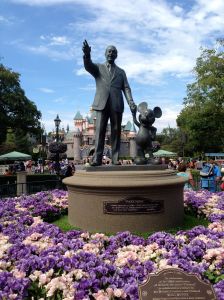 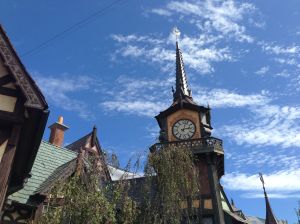 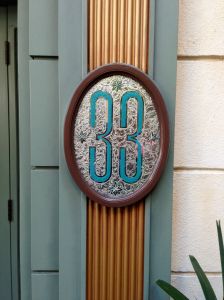 …the highlight of the tour – we got to see Walt’s family apartment over the firehouse!  It is a small place – just mainly one room and a bathroom – but what an amazing place that would be to sit and relax while watching people milling through Town Square?