Well, we probably shouldn’t have, but we ended up going out to eat Saturday night – too pooped from all the running to make dinner.  We have been eating out a lot since moving here – but I think that’s partly because we’re still checking out the place.  We decided to go to the Elephant Bar – Derek has been here before, but it was new to me!  I guess it is a bit of a chain – with locations in California and Florida – but just this one in New Mexico.  The Elephant Bar is located in ABQ Uptown – a somewhat upscale, outdoors mall.  We called ahead – which was great – because when we arrived – the place was hopping and we probably would have had a much longer wait. END_OF_DOCUMENT_TOKEN_TO_BE_REPLACED

In our continuing effort to explore Albuquerque – we made plans for Friday night with friends to go to Explora!  “Explora!” is a science museum in Albuquerque and about once a month – they host adults’ nights – which is a brilliant idea.  Because going to a science museum and watching kids interact with exhibits – not all that interesting.  Getting to play with the exhibits yourself – ka-ching! END_OF_DOCUMENT_TOKEN_TO_BE_REPLACED

Derek had received a LivingSocial deal at Streetfood Asia – so we figured we would go and check it out.  Streetfood Asia is located in Nob Hill, a trendy area of downtown.  It is a popular restaurant and serves, well, street food from Asia!  Dumplings, buns, rice and noodle dishes, tofu, etc. often done in different styles – styles that reflect six different countries:  China, Korea, Japan, Malaysia, Vietnam, and Thailand.  As you can see – the night we went, it was bustling: 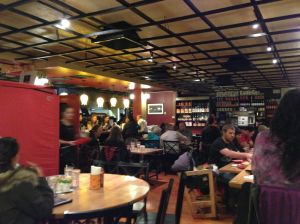 END_OF_DOCUMENT_TOKEN_TO_BE_REPLACED

My dear friend Beth told us that one of the best special events held at the Epcot Food & Wine festival is the French Regional Lunch.  These are extended lunches with wine pairings hosted at the France pavilion (in Monsieur Paul’s) twice a week or so – each day being a different region of France with a different winery doing the pairing.  Since Beth and I have many shared tastes – her recommendation put this event at the top of our list. END_OF_DOCUMENT_TOKEN_TO_BE_REPLACED

For the third year in a row, Derek and I headed to WDW and Epcot for the Food & Wine Festival.  This is absolutely one of our favorite times of the year to go to WDW and one of our favorite events.  This year, we were living in different locations as Derek had already moved out to Albuquerque, so we arrived at different times on Saturday.  Lucky me, I arrived early enough that day to partake in “Taste, Shake, and Indulge like the French” – a Grand Marnier tasting at the France pavilion.  I had convinced Beth, Noel, Carlos, and Eileen to join me for this (yeah, ok, it wasn’t hard to convince them) – although I would have gone alone. END_OF_DOCUMENT_TOKEN_TO_BE_REPLACED

For New Year’s Eve – I had envisioned having dinner somewhere with a view.  And sharing champagne with Derek, celebrating our big change and move to Albuquerque.  So – for dinner, we headed to Sandiago’s Mexican Grill, the restaurant at the base of the Sandia Peak Tram. END_OF_DOCUMENT_TOKEN_TO_BE_REPLACED

Well – we had all the best intentions of making dinner at home, particularly since both of us have put on a few pounds in December and with the holidays and the cross-country drive – there was a lot of eating out.  But, after a day of building furniture, and the apartment still largely unpacked and in disarray – we were too tired to cook and work around all of the unfinished items.  So – we headed out to eat. This time, we decided to try a New Mexican restaurant that is very close to our apartment – El Patron on Montgomery Blvd NE. END_OF_DOCUMENT_TOKEN_TO_BE_REPLACED

Flying Star Cafe is a local chain – they bill themselves as a local chain of cafes with a wide selection of comfort food and desserts.  The location we’ve been to is on Paseo del Norte.  In our few visits – we have already grown to love this place.  The menu is extensive with a wide array of tasty items and, so far, everything we’ve tasted has been delicious and fresh.  The restaurant exudes friendliness and a real community feel – it’s always been buzzing whenever we’ve been with lots of tables of happy, chatting groups. END_OF_DOCUMENT_TOKEN_TO_BE_REPLACED

Sometime in the fall – a crazy plan was hatched through facebook.  A bunch of our friends from our ABD trip to Peru all started talking about WDW over the holidays.  Two groups of them already had overlapping trips planned, and somehow the talk of the Jingle Jungle Cruise created a domino effect, such that a big group of us were all going to come out the same weekend!  Crazy. END_OF_DOCUMENT_TOKEN_TO_BE_REPLACED

My dad was in town this weekend visiting and it’s been many years since he’s been in New England.  He has a penchant for seafood, and especially lobsters – so I did some research and found a nice restaurant up in Mystic, CT.  Yes two strange facts – one, that there is no good seafood to be found in New Haven, despite the great restaurant scene and the proximity to the shore.  And two, that Derek and I have never been to Mystic in our six years of living in Connecticut.

But we took the drive up 95 North (that’s Connecticut North – as it really heads mostly East at this point).  And arrived at our destination for lunch – S&P Oyster Company. 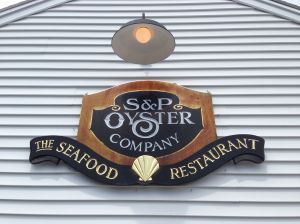 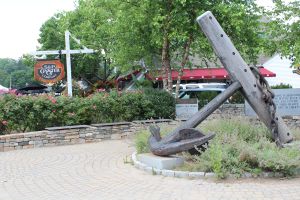 The restaurant is in a beautiful location – just on the river by the drawbridge.  And since we showed up early for our reservation – we lucked out and got a table right by the window.  Excellent!

My dad and Derek started the meal off with some raw oysters.  S&P had six different kinds on the menu – so dad tried all six and Derek had three of them. 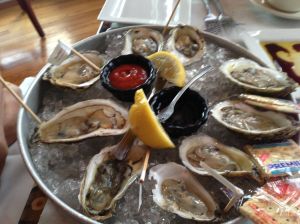 This is where I have to fess up and say – I’ve never eaten a raw oyster.  Just seemed too slimy and squishy for me.  But some wave of courage and adventure overtook me today (and maybe Derek saying that they were really good oysters and not very briny) and I decided to dive in and try my very first.  I ordered two oysters – a Blue Point from Norwalk, CT and a Moonstone from RI. 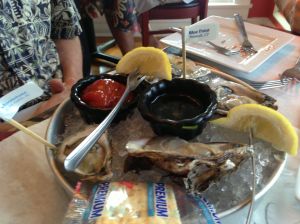 The first one (the Mooonstone) I did with their champagne minionette (?) sauce and some lemon – it was ok, but a little salty.  The second – I added some cocktail sauce and I liked it a bit better.  They were fine and edible – but I don’t think I loved them enough to say I would go to great lengths to eat them.  Evidence that I did indeed suck them down: 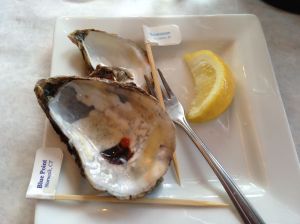 For the main course – the waiter (Jeremy) had talked up the local scallops – Stonington Sea Scallops.  So I ordered them and they were accompanied by a corn tamal.  Delicious 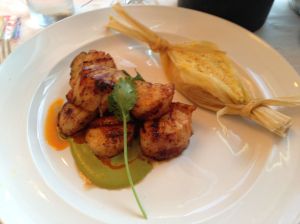 Derek ordered the special seafood trio for the day – mahi mahi topped with mango salsa, a soft taco around some yellowfin tuna, and shrimp risotto (but Derek substituted the Stonington Sea Scallops for the shrimp).

And my dad?  He ordered the whole lobster, of course!  And looked very happy eating it 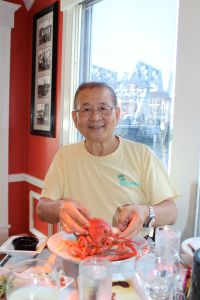 While we were eating – the drawbridge went up and we got to watch the stream of boats pass by: 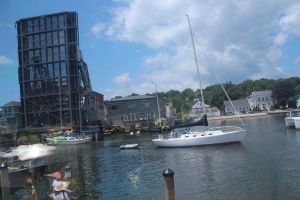 I was really impressed by the counterweights on the drawbridge – huge! 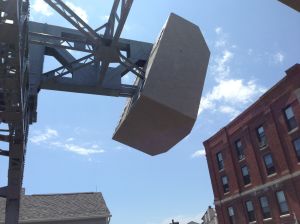 All in all – a fabulous meal in a really lovely setting.  Two thumbs way up!  We would definitely come here again.